If we believe that death separates our loved ones from us,

we will push them away when their memory comes,

remembering the only thing we keep of them: their death.

We won’t let them ever live again, shutting ourselves down to their visits

and to the love we could still keep feeling for them until the day we join them.

As we believe that their death is painful, when the thought of them comes,

instead of feeling the love we always felt when we thought of them,

we feel the pain of their supposed separation, and we push them away.

Lolipop has gone. I had her for 16 months and 26 days and in that time she became a happy dog. I am grateful for that and for all the wonderful moments we had together. Once she began to get over her fear, she was a delight. And she could run like the wind. I would take her into the garden and say Run! Run! and she would be off like lightning

round and round. Then she would race up the front stairs, jump up on the guard post and be King-of-the-Mountain until Salomé and I got to the top. She often wanted to play with Salomé, baiting her in her doggie way, but my little old lady was too 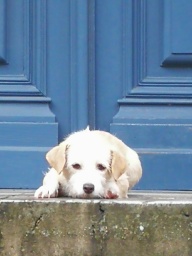 Grand to play with a little mutt. When we walked into town, Salomé was her usual dignified self, walking in a straight line and only occasionally stopping for a sniff or two, but Loli was all over the place, running from side to side, up and down and over and under till the two leashes that I tried to keep organized would be so entwined that I would have to stop and spend time untangling them.

She was still scared of thunderstorms but she got used to the trucks rumbling by (as I have) and it was only with howling winds that she would stick her head under the chair believing that if she couldn’t see you, she was well hidden. But most of the time, when at home she just lazed on her easy-chair 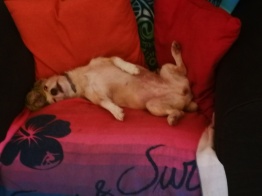 (I have two and 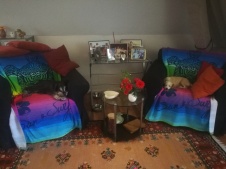 each dog chose their own, so that I seldom got to use either).

Eating was a another matter: she wouldn’t even go near the dish if anyone was looking at her, so I would place her food under the table between the two chairs in the picture and then leave or turn my back so she could eat in peace. The protection of the table and the fact that she thought no one was watching allowed her to eat, but it was a fussy process. She would take a mouthful of kibble and carry it out to deposit on the rug. Then she would eat piece by piece. Most days I ended up collecting dog food spread about under the table and on the carpet, or just let Salomé go in and vacuum it up with her insatiable appetite. 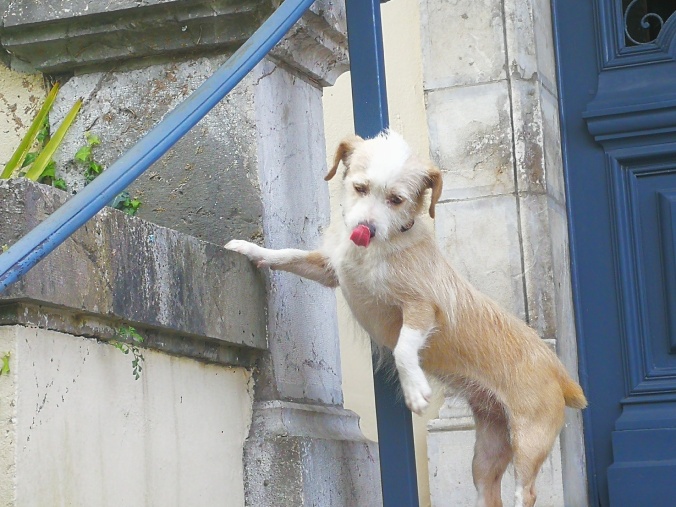 As for sleeping, Loli decided that a dog bed was not her cuppa, and slept every night on one of the two chairs in the living room. But come morning, she would trot into the bedroom to see what was going on. Once or twice she climbed into Salomé’s bed but  my older dog was not the cuddling type and would usually leave the room in disgust although once or twice she just seemed puzzled. 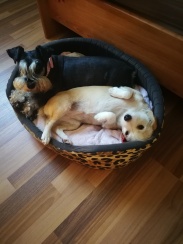 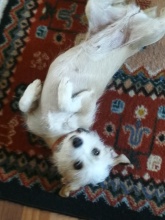 As for preferences, there was nothing, but ABSOLUTELY NOTHING, Loli liked better than having her tummy scratched. Therefore, she spent more time on her back than on her four paws.

So life got good for Lolipop and I was quite content with our little family of three. We went everywhere together and the whole town -before quite familiar with Salomé- now knew Lolipop as well

Then, as always, things began to change. Around the end of September, beginning of October, Loli stopped eating. She fussed, smelled her food and walked away. She would, however, eat any treat offered and frequently, during our walks, would find an old chicken bone or some other horrid delight that I would have to extricate from between 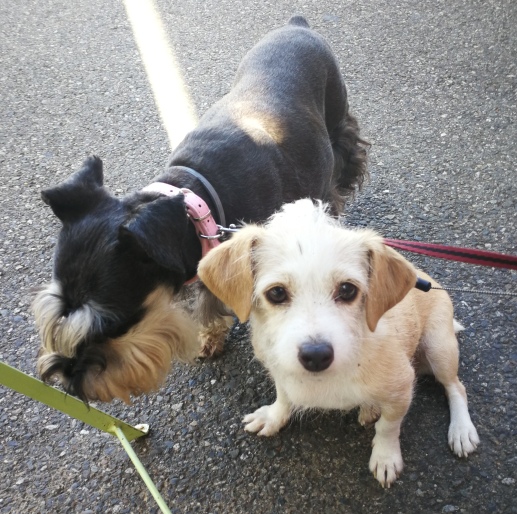 her sharp little teeth. I noticed she was eating only the wet food, licking or sucking it off the dry and spitting out the small kernels of dog food. So I began separating wet from dry. Then, one day, she stopped eating all together. I changed to another wet food and for a few days she ate that, then stopped again. By the third week in October I got seriously worried because she was losing weight and had become listless so we went to the vet’s.

The diagnosis was renal insufficiency. A friend immediately reminded me that it is fear 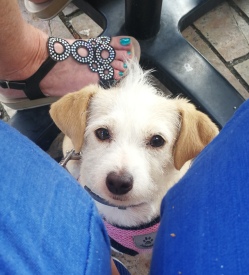 that affects the kidneys and I knew Loli had lived in alot of fear most of her life, first being left in a pen with larger dogs when she was very young and then being abandoned the better part of the day and night all alone on a terrace where the wind and rain must have kept her shaking with fear and loneliness.

For two days, the vet kept Loli, in a cage, with an intravenous needle in her front paw, in an attempt to flush the toxins out. I took her home. She refused to eat until I cooked up some turkey breast. That she ate one day.

Two days later, another blood test served to prove that she had only gotten worse inspite of the efforts. I decided she would undergo no more torture and took her home, knowing that if things got bad I would not let her suffer. Sunday morning, things got bad. I called the vet, he put her to sleep in my arms. My sweet little Lolipop went very quickly 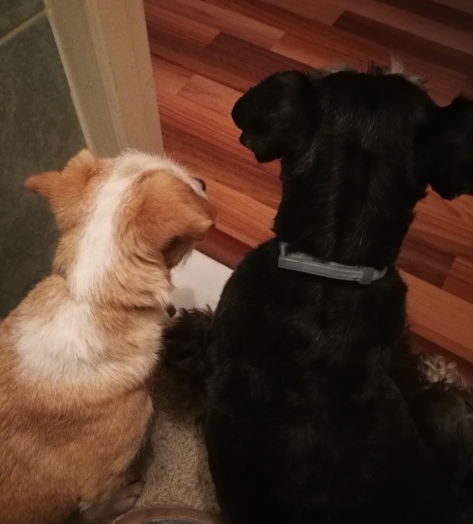 because she was so weak. I spent most of the morning crying, and today -because life will guide you if you let it- I read the above opening quote from an old blog post on death and made the decision to let Loli keep on living in all my sweet, sweet memories of her.