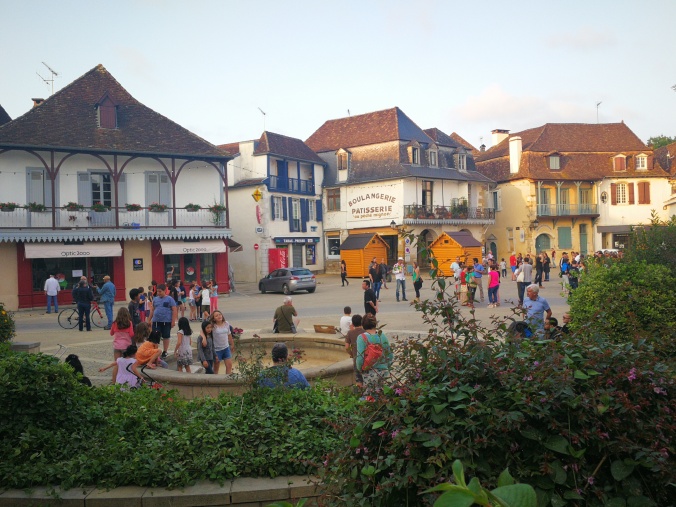 The featured image, if compared with this photo taken today, gives you an idea of the depth of the wáter the morning of the flooding.

Today is the summer equinox, the longest day of the year: June 21. I remember such a day 16 years ago as the day the end of my second marriage began. My husband at the time, had been without alcohol for at least 13 years, longer than I had, but he was having a hard time adjusting to our new life in Madrid and his solution was to hit the bottle. If I had been more vigilant I might have suspected it because his paranoia about what I was doing or not doing began then. He began slyly suggesting that I might not be doing legitimate things with my free alone time; that I might be unfaithful while he slaved away.

In a way, he was right. I was being unfaithful: I had fallen in love with Madrid! Living in Madrid was something I had not even dared dream about because I considered it all but impossible, and yet my non-dream had come true and, upon arriving, I discovered what it was like to live in the so-called First World. I had never experienced such freedom: physical, emotional and psychological. As a woman living in Mexico City, one’s freedom is restricted both by real and imagined dangers, and certainly by unpleasantries. If one walks alone down a street in the city, the least one can expect are wolf-whistles sometimes accompanied by lewd invitations or threatening movements. Women (and men) wear no real jewelry or anything that looks real, and even the cheapest of watches can sometimes call unwanted attention. Your handbag might be swiped as fast as you find yourself lying in the gutter or flat on the sidewalk. Going to a movie alone is inviting some aspiring one-night lover to sit next to you and put his hand where it plainly isn’t called for and being in a restaurant without company (especially male company) makes everyone else look at you as if you had either been stood up or were discretely soliciting. So street-life in Mexico City is usually in a car with the windows rolled up and the doors safely locked or accompanied by a man who poses as a bodyguard, be it your husband, brother, uncle or eldest son.

Madrid, on the other hand, seems populated mostly by single women. They fill the restaurants and loll at the street cafés; they make up the movie’s most numerous public and they can be seen strolling down the sidewalks even in the less reputable areas of town. They go everywhere alone; they drive down the avenue with their car windows down and their arms, decked in Cartier’s or Rolexes, resting freely on the sill. When I saw that, I could hardly believe it. Suddenly I was free! I could go anywhere at any time and not feel I was going to be robbed, raped or kidnapped, not even molested! I walked down the streets of Madrid with my bones singing and my body feeling totally alive, I would smile at everyone I passed as if I were a bit loony or had had a couple too many glasses of wine at lunch. I bubbled, I floated, I chortled, I sang like a bird suddenly let loose of its cage. I had little time for anything else (including my husband): I had fallen head over heels in love with the city of my choice.

Then I fell in love again, and my second love was Salies de Béarn where I have lived for the last 8 years. A peaceful, tranquil, nothing-important-ever-happens-here town, a place where one comes to nestle, to nest. Sometimes it rains too much (is that true?) and sometimes it is too hot or too cold, but in general it is a middle of the way town where one can age peacefully without bothering the very few youths who occasionally burst through town on their motor bikes making as much noise as possible as if to show all us oldies that they are actually here. In other words, it is peaceful… until it gets the rain of a month in 24 hours and the River Saleys rampages through spreading destruction and mud everywhere.

That was one week and a day ago, and as soon as the water receded the people arose, like a team of coordinated ants carrying, washing, cleaning, throwing out stuff, travelling from house to house with one question: How can I help? Firemen and civic workers poured in from nearby villages that hadn’t been hit so hard. Neighbors who had been spared helped clean the houses of those that had been flooded and housed their tenants until they could go home again. An army of volunteers served lunch and dinner all week long for anywhere up to 250 volunteer workers and affected neighbors. Mayors from nearby towns sent their cleanup teams, their plows and trucks; one sent a carload of flowers to refill the drowned planters all around town. The Mayor of Salies offered the food served to all the workers and flood victims, ordered portable cabins set up in front of stores and shops that had been gutted in order for the owners to be able to do business from them while their establishments were mended. Thousands of bottles of water were distributed. Food was handed out to the needy. Companies donated refrigerators, microwave ovens, freezers and other kitchen equipment both to private houses and to the restaurants and cafés that had lost their livelihood. Clothes poured in and furniture and distribution centers were rapidly set up, and the information provided

from house to house so that everyone knew what was available and where they could go to get it. The Red Cross set up their tent in the center and attended anyone who needed it.  Salies was a hive of activity and goodness. Trucks heaved through the muddied streets collecting everything that had to be thrown out and taking it to parking lot I walk through every day which was used as the village dump. A mountain was formed by fridges and stoves and sofas and beds and every imaginable object that could not be restored to previous conditions.

Yesterday, one of the downtown coffee shops –their personnel and helpers having worked around the clock- was able to open and for the first time in a week I got my morning coffee and Salomé her biscuit (Loli too). The center of town finally began to look half-way clean. I went back to the coffee shop after lunch, noticing how glorious it felt to

On the black sign on the wall, the last row of three dots at the bottom marks the height of the wáter at its worst, at least 20 cms above the head of the man sitting next to it.

be able to have my coffee whenever I wished, and found that there was a gentle man (yes, a gentle man) playing a synthesizer on the sidewalk to entertain the people on the terrace. To my delight, he even played a Mexican melody –Sabor a mí (the taste of me)– which set me to singing the words under my breath. And now, this evening, Salies celebrates the summer equinox with its very own Music Festival.

It is a tradition in France that all the cities and villages celebrate the 21st of June throwing a music festival. Usually, different organizations put up stalls and sell food and drink to the crowds that gather to hear the music. Tonight there is a smaller crowd than usual (perhaps the tourists who usually attend festivals in different villages have been put off by the dramatic photographs in the news), and all the food and drink is free, its cost being absorbed by the Mayor. It is good to see the center full of people again; it is good to hear laughter and singing. And there is no doubt that the unfortunate event has left a positive result overall in a feeling of 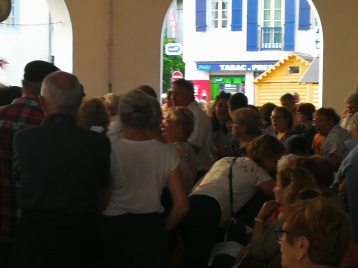 community as I had never before experienced. I find myself talking to all kinds of people with whom I would have barely exchanged a ‘bonjour’ before because now we have something common to talk about. The conversation may stray to other topics after a bit, but the introductory questions are: “were you affected?” and “are you all right?”

If before the flood I had already tasted the delights of living in a small community, now the profound benefits become palpable. My heart expands with love for each and every one of the people I have come to know here, as I turn to leave and return home, leaving the sound of the Bearnaise choir filling my ears and my soul.

3 thoughts on “ONE WEEK AFTER”