In my last post I spoke of forgiving myself, but recent events have made me think about forgiveness in and of itself. I have come to believe, through personal experience, that the best definition of forgiveness is the one that Byron Katie gives: “Forgiveness is the realization that what you thought happened, didn’t.”

This is true: if I believe someone has done something wrong to me, I can question the belief that they did it to me which invariably leads me to see quite plainly that it had nothing to do with me and it was only I, myself, taking it personally that caused the pain. If someone hits, insults or in some way tries to harm me, I can understand that they are doing the best they can in that moment with what they are believing about me or about themselves (they are striking out against the person they believe me to be, not who I really am). This, of course, doesn’t mean that I will stick around and let them continue abusing me or themselves, but understanding that they are doing the best they can with what they believe in the moment, allows me to see that it has nothing to do with me and therefore there is nothing to forgive.

I had quit drinking –let´s say- three months earlier, in other words I still wasn’t emotionally very sober. My mother came over to our house (I was still married then) for supper and she came through the door gaily announcing to my husband: “Fernando, your drinking partner is here because Brianda no longer drinks.” I flew into a red rage

–doubly so, because my husband couldn’t understand what I was so angry about- said a couple of nasty things in a loud voice and stomped off to the bedroom. The thought was: ‘How can she be so cruel’, obviously to me. That scene alone sufficed for years to prove to me how unloving my mother was which, of course, was one of the reasons I was so messed up.

It wasn’t till years later, many years later (after my mother had died, actually), that I questioned that belief, thinking it was time to forgive her. The thought was: she was being cruel. As I viewed the scene, in my mind’s eye, first holding the thought (still rage) and then without the thought (sudden realization and laughter), I saw clearly that her entering announcement had nothing to do with me. It was my mother being her usual flirtatious, playful, man-attracting self that always wanted attention (but only all of it). As I watched the scene play over again and again in my mind’s eye, I felt a wave of love for my mother, a smile spread across my face and a mad desire to run and embrace her took hold of me. I felt so sorry I had treated her badly at that moment. It was then I realized that there was nothing to forgive, there never had been. There was a sadness in my work that day for, when I turned the thought around (I was being cruel to her) I could definitely see that I had been, attacking her directly with every intention of hurting her. But The Work freed me. It freed me to love my mother with all my heart which is my birth right.

Even forgiving myself is understanding that there is nothing to forgive: I can’t know to do any better than I know to do in each moment; when I raged out at my mother, I was still believing all my thoughts. It would be many years before I was freed from this. So when I said in the previous post that I forgave myself, it actually was saying that I

realized I had done the best I knew how to do with the information I had at the moment and that now, with new information, I would hopefully not repeat the mistake. Slate wiped clean.

So this is what Katie means when she says that forgiveness is understanding that there is nothing to forgive; that we are all, in every moment, doing the best we can with what we believe.

Unfortunately, the person who supposedly (the harm is done, she said, but never specified where or how) suffered the wrong I unwittingly committed, does not feel the same way. For her there is no forgiveness possible. I would not know this for sure (although I suspected it would be so, knowing this person) until yesterday morning when I worked up enough courage to walk into town and enter the café where we gather.

As far as the group went, there was only one person (whom I will call our local Drama Queen because she is always in a state of righteous anger about something somewhere she has found wrong) in the Café and I walked over to say hello. Before I could reach her, she swung around on her barstool and told me she was furious with me because I had fought with the other member of the group and therefore she –the person I had fought with- wouldn’t be coming to the coffee group any more as long as I was there, and therefore the Drama Queen would never see her again. I politely, but firmly, set the story right (I did not fight with her, I made a mistake and she was apparently hurt by it) and told her not to worry, that it would be me quitting the group so the other friend could come. I realized, in that moment, that I had made a decision.

The ironic thing about this scene is that the person whom I hurt and was not going to come to the café any more, can’t stand the Drama Queen who was so bitterly lamenting that she would never see her again (something ridiculous as they live in the same town and if they were friends they could visit each other; but they are not even friends). Anyway, I sat alone and drank my coffee and then left.

Strangely, as I walked home, the thought of not going to the café every morning for coffee didn’t weigh me down; on the contrary, I felt lighter. Inside, there was a conviction that the Universe never closes a door without opening a window, and all of a sudden I began looking forward to what might come next. Yes, during the afternoon, I had a couple of down-thoughts (I won’t have the group to buy presents for when I travel any more, and there will be no birthday celebration for me on the 1st of August this year) and a slight feeling of loss swept through my chest thinking of the friend who will not forgive, but on the whole I felt pretty good. During the afternoon, I wrote to the coffee group and explained the situation without going into details, and announced that I would be retiring from the group out of respect for the ‘injured’ party who had been there long before me.

One friend answered, it was the artist and sculptress. She jokingly suggested that instead of a café group we form a restaurant group and invited me to join her and some painter friends for lunch the following day (today). I gratefully accepted, and there it was: new beginnings. Added to that, a dear friend who reads my blog, alerted by the last post, emailed me to let me know she was there if I needed anything. That felt so sweet that grateful tears filled my eyes. 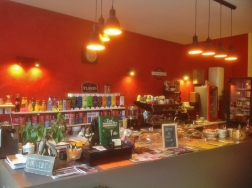 This morning I went to another café (where the coffee is slightly more expensive but much, much better) and had a jolly conversation with a woman who was visiting from a nearby village (in French!). Then at noon, I met the Artist lady and her friends, spent a delightful two hours and had a delicious lunch. C’est la vie, what to do, that’s life!

5 thoughts on “FORGIVENESS, OR WHEN THE UNIVERSE CLOSES A DOOR, IT ALWAYS OPENS A WINDOW”