After my divorce late in 1992, one of the first things I did was to take a trip to Spain to attend my favorite uncle’s 80th birthday celebration. Other than flights back and forth to boarding school where I was seen off by my parents and met by my maternal grandmother, I had never before travelled alone, so it was quite an adventure.

In Madrid, before I drove to Jerez for the party, I met my cousin, Marina, with whom I had kept up a lively correspondence over the years since the time she had lived briefly in Mexico and we had become friends. Marina invited me to go see an Argentinian woman who read the tarot cards. I didn’t really believe in those things, but it sounded like fun and as I was starting out on a whole new life, I was interested to see what she would say.

I went in first and sat in front of a woman in her thirties who held a deck of cards in her hand. As I watched she turned up a row of cards one by one. I don’t remember the faces on them. Then she raised her eyes and looked at me.

“What are you so afraid of?” she asked in Spanish with an Argentinian accent.

Considering I was not conscious of being frightened, I had no answer. Yes, I had been afraid before leaving Mexico. When my uncle wrote and invited me to his birthday party, I mentioned to a friend how sorry I was not to be able to go.

“Why not?” she said, “You’re free; nothing to stop you. Go!” It took me all of five minutes to realize she was right so I got my plane ticket, reserved my hotel and flew to Madrid all alone. I was so nervous and excited that I couldn’t sleep on the plane; I watched three movies. When I arrived at my hotel at around 9a.m. I was exhausted and miserable. Before falling asleep, I decided I would catch the next plane back.

Nevertheless, when I awoke at 1 p.m. with the sunlight streaming in my window and a light breeze blowing across my face, instead of fear, I felt exhilarated. That had been several days before my meeting with the foreseer and I hadn’t felt a bit of fear since. Yet the Argentinian woman insisted that I should look into the matter as soon as possible.

With her admonition in mind, I decided to be daring and rented a car for driving alone to Salamanca. After a night in the Medieval University city, I was about to return to Madrid but, when I reached the highway there was a sign pointing in the opposite direction, reading Zamora. During my studies of Spanish literature I had discovered the fascinating character of Doña Urraca who came from Zamora so, instead of heading for the Capital City. I turned right and took off on my first adventure.

Zamora was not a disappointment. I stayed there overnight in a roadside hotel and left the following day for Madrid. However, still thinking of my card reader’s advice, I did not take the Freeway back, but rather decided to travel secondary highways which took me along the border with Portugal. My chosen route took me through a beautiful mountainous country which was a nature reserve. After a while, I noticed there were no other cars on the road, neither coming nor going and my immediate thought was, “what if I have a flat tire?” Needless to say, I began feeling a bit nervous, but the crevices and peaks were so breathtaking I soon forgot my worries and enjoyed the scenery. It was over two hours before I reached anything that looked like civilization.

I spent the rest of the trip driving all over Spain without a quiver in my heart, and I hoped that would do it as far as fear was concerned. I returned to Mexico over three weeks later without a mishap and feeling like a seasoned traveler with the world just waiting for me.

About ten days later, a friend called and said she was going to run the rapids in the state of Veracruz and would I like to come. The rapids sounded like something that would really frighten me, so I accepted and a week later I found myself on the bank of the Fish River (Río Pescados), donning a helmet and a life jacket, grasping an oar and climbing into a

Zodiac with 9 other daring people.

We had been carefully instructed how and when to paddle forward or backwards, what to do in case the instructor yelled “high side!” (which meant that the raft was thrown against a rock and the people on the side the rose had to push hard to force the zodiac back to level position), and how to hold ourselves tightly by tucking our heels under the cushiony inflated tube that formed the side so as not to fall overboard while, at the same time keeping our hands free to handle the paddle. We had also been told what to do in the case of falling into the water (something I had no intention whatsoever of doing): be sure, the instructor said, to go with the current feet first so you don’t hit the rocks with your head; do not let go of your oar. If the river pulls you under, don’t struggle, it will bring you out again by itself; do not let go of your oar. I repeated the instructions in my head although if there was one person who was not going to fall out of the zodiac, that was me. 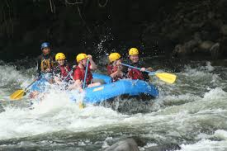 The instructor (our captain on the descent) also mentioned that the heavy September rains had glutted the river, raising it from a number 3 rapids to a number 5 (the maximum is 6), so we were in for a good ride. This news made me even more decided to not fall overboard. I’ll admit I was scared, but I was doing it, wasn’t I?

The rapids were fast and furious, and we worked really hard to keep the zodiac straight (steady was out of the question), but I was getting the hang of it and beginning to feel more confident when a large rock appeared in the middle of the waters.

“There might be a hole on the other side,” yelled our captain, “¡hold on!” I wondered what on earth a “hole” was in the middle of a river, but didn’t have much time to think about it because we were accelerating and had to paddle faster than ever to keep the raft under control as we rushed past the boulder and into the “hole”. I now know what a “hole” is. It is the effect of a great amount of rapidly flowing water washing past a large obstacle such as a boulder; immediately on the other side of the obstacle, the water form a kind of furious depression before shooting out again down river.

As we entered the enormous “hole” that the boulder was causing the water to form, the zodiac literally folded in two and then sprung open again flinging the three persons in the rear into the river. I was one of them. I suddenly found myself in a vortex of water (no oar in my hands, of course) that was flipping me over and over like just one more pebble in its current. I struggled to get my head out of water and finally managed. But, just as I opened

my mouth to breathe, a wave hit me square in the face and the river pulled me under again. Suddenly I had twisted and turned so much that I no longer knew what direction was up. My mind produced one thought: “How can you be so stupid to come and drown in a river called Fish!” and I knew at that moment I was going to die, so I just stopped struggling and sunk into the deep sorrow of that certainty.

Of course, the moment I stopped struggling, the river pushed me to the surface, I gasped for breath, saw an oar stretching towards me and grabbed it. Someone pulled me onto another Zodiac and I was saved. The experience of joy was immediate: I had not come to the Fish River to drown that day.

The moment I was safe, in my mind I suddenly experienced that something had been out of my body. For some time I spoke of an “out of body” experience, saying that I had been out of my body, but now I realize there was no I at all, just as there was no “out”: it was a non-local, non-personal experience of what I have since called ‘cosmic compassion’ for a minuscule body being tossed about in the rapids, and whatever it was, could not experience itself, because there was no self, no identity whatsoever. The experience was only realized (made real) when self was restored by my body being pulled out of the water.

For me, this experience was instantaneous so that my self-identity returned in full the moment I was pulled from the water. For others –Byron Katie and Dan Siegel, for example—the period of self-less-ness lasted much longer and the experience transformed their lives completely. You can listen to Dan’s experience through the following link: (https://www.facebook.com/eOmega.org/videos/10153492113806325/ ) and Katie’s is in her book Loving What Is and several others.

As my experience happened when I was still at a very primary stage in my evolution (I wasn’t even to hear of Byron Katie for years to come), I immediately related that happening (or non-happening) to some form of the religious idea of soul so, henceforth, I believed that there was a part of me that didn’t die.

Today, I don’t even try to define it or give it a name: it is what is when the self disappears, the self that lives the dream it calls life. It is the “stroke of insight” that doctor Jill Bolte Taylor talks about after experiencing a massive stroke (https://www.ted.com/talks/jill_bolte_taylor_s_powerful_stroke_of_insight?language=en) and discovering the difference in perception of the two hemispheres of her brain; the no-where-to-go-nothing-to-do of Jeff Foster’s Life Without a Center (https://batgap.com/jeff-foster/), the freedom of the Don’t-Know mind with the four questions of Byron Katie.

I have not re-experienced that no-self, I don’t have to, I am here to live in the self at this moment and enjoy it. If I find there is something I am not enjoying, well I have what for me is the simplest way of setting myself free: I have 4 questions and a turnaround for which I am forever grateful (see www.thework.com).