Two messages received during my birthday celebration have stuck in my mind: one said, “That’s right, be happy” and the other thanked me for reminding its author of the importance of gratitude.

I have often told the story of how I awoke to gratitude, so bear with me as I repeat it briefly.

After my divorce I couldn’t stop crying and I was so sick of feeling miserable when all I wanted was to be happy, that one day I fell to my knees and asked a God I didn’t believe in what it was exactly that was I doing wrong to feel so unhappy. Nothing happened, so I got

up and began fixing my makeup. Then, I heard a voice –it wasn’t my voice and it wasn’t a thought- it was an unknown, somewhat masculine voice in the space I call my mind, and it said: Brianda, life doesn’t owe you anything. That was all, and it was enough. The realization that I had spent my whole life looking at what I didn’t have instead of being grateful for what I did have was immediate. My thought: ‘Life gave me life, all the rest is gravy’ sent me racing around my house like a madwoman thanking every object that I owned: stairs, roof, sofa, fridge, walls, rugs, tables, books… everything. When I finished, I was so happy I hardly fit in my own skin.

So, for me, the path to happiness is gratitude. Those five words (life doesn’t owe you anything) are the most important thing that has happened to me in my life, bar none.

This morning, as I walked to coffee with Salomé, I tripped over a cable lying across the path and went flying forward, falling with all my weight on my right arm and hip. A man rushed 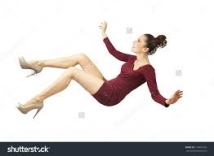 forward and, grabbing my arm, tried to pull me up. Why do some people think that pulling you right up is the best thing to do? Could it be that they are embarrassed for you lying there on the pavement? I was actually feeling very grateful for the solidity of the street that was allowing me to be very still for a moment and mentally check if there was anything broken. It felt so good to just not move and simply go from limb to limb mentally gathering myself together.

I noticed I had skinned my arm right below the wrist and it was bleeding. I showed the man (who was standing over me looking extremely worried) and said, “This is all that has happened, nothing broken … isn’t that good?” Actually, I didn’t mind at all being on the

ground (Salomé didn’t seem to mind that I was there either; she was just sitting on the side observing the whole scene) but the man seemed so upset about a woman fully dressed, with earrings and all, just lying there on the street that I thought I would try to ease his mind by making an effort to get up.

It was a very slow process, but every time he tried to help I discouraged him; something told me that it was important for my body to do this by itself, at its own pace. Slowly, I pulled myself together and up. The man looked less worried and actually smiled. Then he pointed to my arm that was bleeding a bit. I dug into my handbag (it had not even fallen off my shoulder) and, giving him a big smile, produced a kleenex with which to stem the bleeding (really not much at all). I thanked him for being so willing to help and walked the rest of the way to the Café for my morning coffee and a chat with my friends.

Upon arriving, I showed Rose, the owner, my damaged arm and she produced a Band-Aid (in French, pansement, so I learned a new word too). All was well; I had my coffee and walked home again, this time without

falling. Ahh, so much to be grateful for!

4 thoughts on “FALLING DOWN, GETTING UP”