Usquain, a miniscule village in south-western France, is much smaller than Hadleigh, so much smaller, in fact, that many people have never even heard of it. In 1842, it was politically and demographically joined to a nearby locality called Tabaille and since has been known as Tabaille-Usquain which in 2006 had a population of 53 people with a density of 12 sq. kms/per person. As a matter of fact, the only reason anyone at all might have heard of Usquain is because the Domecq family originated there and anyone in England, Spain or France who drinks sherry or brandy or is into bullfighting or thoroughbred horses has heard of the Domecq family. 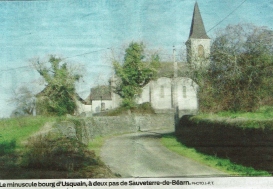 According to Paul Raymond (see Wikipedia), a French archivist and historian born in 1833, Usquain in the year of 1385 was composed of twelve families and belonged to the territory (canton) of Sauveterre. Actually, the 12 families were spread out over something called La Veguerie de Campagne de Usquain, with the word ‘veguerie’ meaning a group of counties or districts within the ‘countryside’ of Usquain. So it is possible that the 12 families in the list never saw, or perhaps had never even heard, of one another. The inhabitants of Usquain were vassals to the viscount of Bearn up until the time that this region was absorbed by France. Raymond continues: “Usquain is the cradle of the Domecq family, dynasty of wine producers and merchants and raisers of brave bulls in Jerez de la Frontera.”

It was neither a big cradle, nor a rich one and today all that is left is a large abandoned house that supposedly belonged to the Domecqs and is at present claimed by some 200 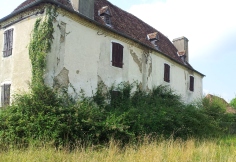 squabbling descendants thanks to the impossible French inheritance laws. It is crumbling and surrounded by a thick wall of brambles that in summer produce tiny, edible blackberries; the building itself is probably past the point of recovery. There are two smaller houses –one with a barn-like structure attached to it- inhabited by a pair of sisters from Granada, Spain and their families (it is anyone’s guess what they are doing there). Across the patch of dirt that serves as a parking lot for occasional visitors, lays a 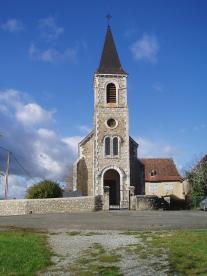 fourth house next to the chapel; this house is also crumbling. The chapel was apparently built sometime during the 19th century by someone from the Domecq family, probably my great-great grandfather or uncle. The door is open and one can go in and somebody is keeping it up. A sign on the door lists three priests and their phone numbers for emergencies, and the times when services

are held elsewhere. There is a graveyard beside the chapel, and on one very old gravestone lying on the ground next to the chapel wall, the name DOMEC (the original spelling) can still be made out. There are four gravestones lying together, but the others have long since given over their letters to the elements. 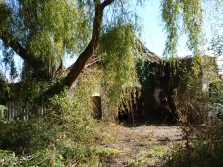 The first time I visited Usquain, someone took me, but the second time I went alone. Back then there was a smaller house built of stone behind the Domecq building; it has since been torn down. One stone to the right of the front door had the words ICI VI DOMEC and the year 1662 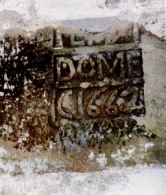 written under them. One may presume that the “stone house” was, at one time, the main house and might even have been where Jean Domecq was born in 1615.[1]

The year of Jean’s birth is even more uncertain than that of Elizabeth Smyth for it has been calculated by taking the year of his first born son’s marriage (1666), subtracting more or less 25 years for his son which is estimated as the age at which men in those days married and then 25 years for his own marriage (estimated in 1640-41 more or less) to arrive at 1615-16 as his birth year.

Apart from this, we can’t even say if Jean was a Huguenot or not (couldn’t resist that one), or if the Domecq family continued being Catholic in spite of the Wars of Religion which raged across France from 1562 to 1598. Apparently, the Huguenots –like their 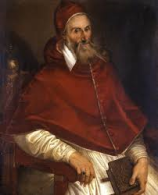 counterparts in England- believed that the Catholic Church needed radical cleansing of its impurities and that Pope Pius IV, ruler of a worldly kingdom, sat in tyranny over the things of God determining who was saint and who was sinner as if on a hotline to the Divine.

The Huguenots managed to rally a considerable army and cavalry; their strength and wealth grew when they allied themselves to Henry of Navarre and the House of Bourbon. At the height of their movement, the Protestant Huguenots dominated around sixty fortified cities and posed a serious threat to the Catholic crown and Paris.

Never ones to be less than the English in any way, the French also had their own bloody 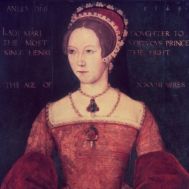 Mary to persecute their own Protestants. In 1559, King Francis II and with his wife, Mary Queen of Scots, came to power. During the eighteen months of her husband’s reign, Mary 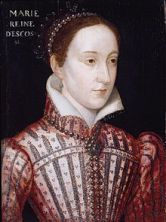 encouraged a rounding up of French Huguenots on charges of heresy, employing torture and burning as punishments for dissenters from the one true religion. This Mary, however, would pay for her crimes. She returned to Scotland a widow in the summer of 1561 and later, after 18 years of imprisonment, was executed by her half-sister Elizabeth I of England.

The same year as Mary’s widowhood, the Edict of Orléans declared an end to the persecution and formally recognized the Huguenots for the first time. As usual, the official position did nothing in reality but mask the growing tension between Protestants and Catholics which broke out in eight civil wars between 1562 and 1598. In 1589, Henry of Navarre became Henry IV of France and, having officially recanted Protestantism in favor of Roman Catholicism, issued the Edict of Nantes which declared Catholicism as the state religion, but granted Protestants equality with Catholics and a degree of religious and political freedom within their domains. With this he ended the so-called Wars of Religión.

Interestingly enough, one of the Huguenots principal domains was the Bearn region in the southwest of France, within which lies Usquain. As the Catholic chapel which stands there today was a much later addition to the small gathering of houses, there is no way of knowing what religion, if any, was practiced by the family of Jean Domecq in 1615 when he was born. 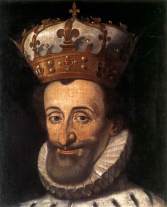 The “Good King Henry’s” dance between the two religions, however, was not appreciated by either side. Considered a usurper by some Catholics and a traitor by some Protestants, he suffered at least 12 assassination attempts. In the end, it was a fanatical Catholic who finally finished the job in the year of 1610.

By 1620, when Jean was just turning five, the Huguenots found themselves on the defensive once more; between 1621 and 1629 in southwestern France three small civil wars broke out against the royal authority. There is nothing to prove that these, in any way, touched Jean who was undoubtedly in the process of reaching adolescence and learning the trade of his father, which was tending to the land, though perhaps not working it with his own hands due to the domenjadure (see The Project) or nobility of the land.

Around 1640, Jean de Domecq married Marie Darindolle (of whom we also know absolutely nothing) and one can suppose that by 1641 they had given birth to their first son, Jean de Domecq and Darindolle. There apparently was a second son, called Pierre, but nothing is known of him other than his birth. 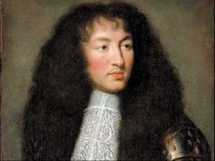 In 1643, when Louis XIV (le Roi-Soleil or Sun King), ascended to the throne, he wasn’t so ‘Sunny’. He began an increasingly aggressive campaign of conversion against the Huguenots. First he financially awarded those converting to Catholicism, then he imposed penalties on those that didn’t: schools were closed, churches destroyed and Huguenots excluded from favored professions. Wishing to force the unrepentant either to convert or to flee, he instituted the dragonnades, which gave military troops permission to occupy and loot Huguenot homes. Finally, in 1685, he issued the Edict of Fontainebleau, declaring Protestantism illegal, forbidding services, requiring the education of children as Catholics and forbidding emigration.

This proved disastrous. It precipitated bloodshed, ruined commerce and drove hundreds of thousands of Protestants to flee illegally from the country. Many were to become intellectuals, doctors and business leaders in their new homes which included England, Holland, Prussia and South Africa. Over four thousand emigrated to the New World, where they settled mainly in New England. The Huguenots who stayed in France became Catholics and were called “new converts”.

The fact that in 1666, one month after his son married, Jean de Domecq, the father, paid 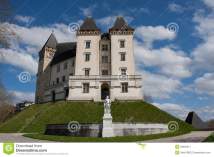 homage to Louis XIV in the Castle at Pau, as would his son and his grandson, each in his own turn, tells us that if he ever had been Huguenot, he had definitely recanted by this time. Nevertheless, one must wonder because the region of the Bearn was the only one in France to have Protestantism declared as the dominant and official religion for over 50 years. However that may be, he could never know that his direct descendants, in Jerez de la Frontera, would be, marry and produce during the 19th Century a breed of Catholics so devout that some might have called them “rabid”.

[1] Here I must tell a story that belongs to the second time I visited Usquain. The first time I had been there, the overgrowth was so high and tangled that there was no access to the small stone house and I just gazed at it from a short distance away. The second time, however, someone had cleared the land and the door to the house was open. I peered in; the roof had half fallen in so there was light inside, but also pigeons and bats. Everything was covered with dust and the pieces of furniture still present were broken and missing parts; bird and bat excrement was everywhere, everywhere that is, except for on a white wedding dress that was laid across a dining table, itself also complete. The dress was immaculate and yet, all around there was nothing but dust and dung. The resident pigeons peered down at me from the rafters and showed their discomfort with my presence by shooting out a few more whizzes of poo, but I couldn’t take my eyes off the dress. What was it doing there? How long had it been there? Who had left it? Why wasn’t it soiled? And why in god’s name would anyone have left an apparently new, white dress amidst all that abandoned rubble? I swore at myself for not having brought my camera and, before leaving, looked around to ascertain that there was nothing else new or recent that might justify the presence of the dress. There wasn’t. I left in a state of awe at the strangeness of the universe. The next time I went to Usquain, they were tearing down the little house; of course, no one had seen a white dress.