My daughter promptly corrected me this morning. The Mexican hairless dog is the xoloitzcuintle (an escuincle is the popular name for a boy, a kid). 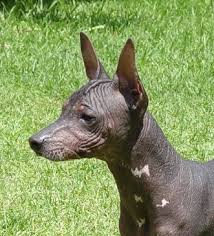 The word “xoloitzcuintle” comes from the Náhuatl: “xolotl” in náhuatl means animal and in the mythology of the Mexicas and the Toltecas it is the God of evening, of spirits, of twins and of the twilight Venus believed to help the dead during their journey to Mictlán. “Itzcuintle” means dog.

Xolotl is often depicted with the head of a dog:

Also, according to Wikipedia, it is not certain that the Nahuas ate them. Apparently, Hernan Cortés reported that “certain small dogs were bred to be eaten” and sold at the market. According to this account, these small dogs were called “itzcuintlis”, and there is the possibility that he mistook the word tepezcuintle (lowland paca), a large form or rodent that looks slightly like a

small dog, that is eaten still, for the word xoloitzcuintle. I, myself, have tasted the meat of the tepezcuintle and can testify that it is delicious, delicate and tender, with a flavor somewhere between lamb and veal. At present it is on the endangered species list and the sale or consumption of its meat is forbidden.