For instance: I am cleaning out clothes and I come across a pair of pants I haven’t worn all winter. For a moment I contemplate putting the pants in the “out” bag, and then my mind says: ‘It’s your only pair of green pants; what if you want to wear that green sweater next week?” When I had looked at the pants a split instant before and had separated them from the others in the closet, it was because I saw that they were out of date, worn at the sit-downs, slightly faded…  It was the mind: the thoughts about the ‘loss’ of the pants made me feel fear, fear of a non-existent future where I would suddenly exclaim “¡Oh, I never should have thrown out those pants! ¡Now I have nothing to wear with the green sweater!” and these thoughts had nothing to do with the actual pants in front of me. Without a thought, the pants are gone; I am not attached to them ever, only to my fearful thinking about the pants. 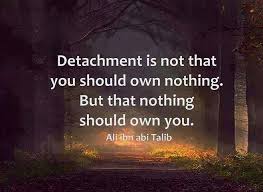 It is not possible to be ‘attached’ to a thing, not even to something as close and common as my own breathing. My breath started without my willing it and will stop without my being able to avoid it: it is not attached to me nor I to it, although I may be attached to the thought that I don’t want it to stop.  If I am attached to this or any similar thought in relation to my own breathing, I will probably begin to experience some anguish if my breathing becomes labored at any point, as due to a pulmonary congestion or something. The thought “I don’t want my breath to stop” to which I am apparently very attached because I believe it to be true, will probably produce enormous amounts of anguish the moment my breathing seems not normal, result of which will be to make my breathing even more labored than it was to begin with. So it is the attachment to the thought and not to the breath that causes my suffering. If I suffer apnea at night and stop breathing for periods of time, there is no problem: no thought, no attachment. The attachment is to the thought (I am going to suffer, to die, it will be terrible) not to the breath. 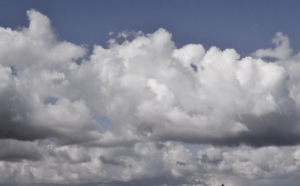 The moment I claim it as “mine” (a mental construct called ‘possession’), my breath, I become attached to the thought that it belongs to me, like ‘my’ pants, or ‘my’ son. The mind is that way. As a matter of fact, the mind attaches everything to everything else chaining together events, people and things until we are caught up in a veritible ‘network’ of attachments in a world of distinct and unattached objects (and I include people and even emotions). A friend of mine had kept an old chair because it was the one her mother used to sit in to read (‘I’m attached to it because it was my mother’s’ she’d say when someone suggested she get rid of it). Then her sister came one day, saw the chair and immediately identified it as being an old one her mother had absolutely hated and had placed in the garage thinking to get rid of it. My friend immediately saw the chair for what it was and threw it out: no thought (story), no attachment. 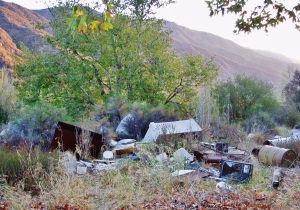 And so it is with every single thing in this fantastic experience we call life. I think of my son and my heart aches a bit with the desire to see him. Am I attached to my son? Of course not! By what means would I be? One might say “my heart strings”, but where on earth are these located? No such thing. I am attached to the thought of my son (the image I have created of him in my mind), whereas the instant before the thought and the instant after the thought I could just as well never have had a son; and for all I know, I might never have had him, except in my imagination; I have heard women lament the absence of sons they have never had as if their heart would break at the loss. Then my son

phones: I am in the middle of writing this blog and tell him that I can’t talk now and will call back later; later comes and I am hungry so I set about fixing my dinner forgetting completely to call my son. Where is the attachment when there is no thought? So it can’t be the son I am attached to, but the thought of my son and that is all I am attached to.

So there it was. I went to London to sell my mother’s jewels which I had held on to for over 20 years (ever since she lost herself in dementia). Before she died I couldn’t sell them or give them away (if it had been my desire) because they weren’t mine. After she died, for reasons beyond his control, my brother -with whom I had to share the inheritance- was not available to make the necessary decisions. So, after 20 years of never using (I wear very little jewels and hardly ever the real stuff) them, and having had to hide them every time I travelled for fear someone would come in and steal them, my brother and I went to London, marched into Sotheby’s, and signed away a nice amount of diamonds to be auctioned off in June. So many people had asked me if it wasn’t painful to part with my mother’s

jewels that I had actually sat with myself the night before looking for some thought of attachment that might jump out of the unconscious shadows the moment I exited Sotheby’s without the booty. Having found none I had no problem signing the corresponding papers the following day. What I had not expected was the physical sensation of lightness that enveloped me the moment I stepped into the street making me feel as if I were a form of Mary Poppins without umbrella floating about 1 foot above the pavement. I found myself singing and dancing my way to the nearest restaurant where I was so happy I actually paid for my brother’s lunch. Was this Nirvana?

Did Buddha say that when one achieves complete detachment, one finds Nirvana? Or was it just peace one achieved?  Are peace and Nirvana the same thing? Katie just says ‘Question your thoughts, set yourself free’ or something similar. And what, after all, is Nirvana if not peace, serenity, wholeness, freedom, joy, love, presence, astonishment, joy again and again, right here, right now? 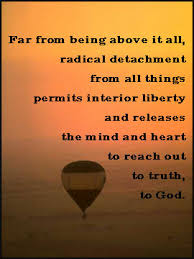