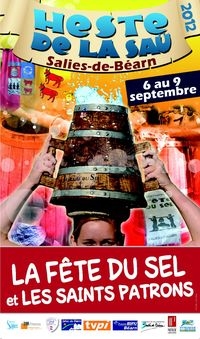 The Heste de la Sau (Fête du Sel in French) or Salt Festival is the principal yearly happening in Salies. When summer has been spent, when kids are back in school, when the public officials are working again and most people have ended their vacations, Salies throws caution and economics to the wind and goes all out for four days. Activities that seem to gain momentum with each passing day mark the town’s celebration of the product that has justified and enriched its existence since at least a thousand years ago: salt or ‘white gold’ as it is often called here. At the center of Salies, the Place Bayaa, there is an underground source, which the inhabitants of the town have exploited first manually and now industrially, that contains water said to be ten times saltier than the sea. It is called “La Fontaine Salée” 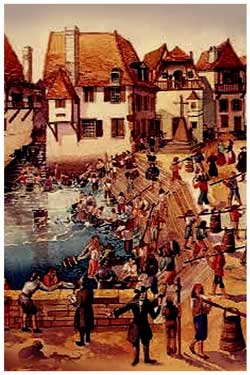 and it is said to have been used for salt production since the Romans lived here, through the Middle Ages and up to today. At present, the Source is completely paved over and the salt water piped to the salt plant on the outskirts of town.

The summer before I moved to Salies was the first time I attended the Salt Festival. The crowds were so thick that walking was impossible and I remember thinking that I wouldn’t do it again. I watched the traditional race known pompously as The World Championship of Sameaux Carriers, “sameaux” being the wooden barrels in which the salty water is transported from the source to the individual houses where the salt itself is extracted. It was different but ultimately boring, not the sort of thing I would make a habit of. Yet today, Sunday, the last day of the Festival, after having finished our morning coffee I suggested to Kiwi-san that we stroll through the Place Bayaa and take a look at the 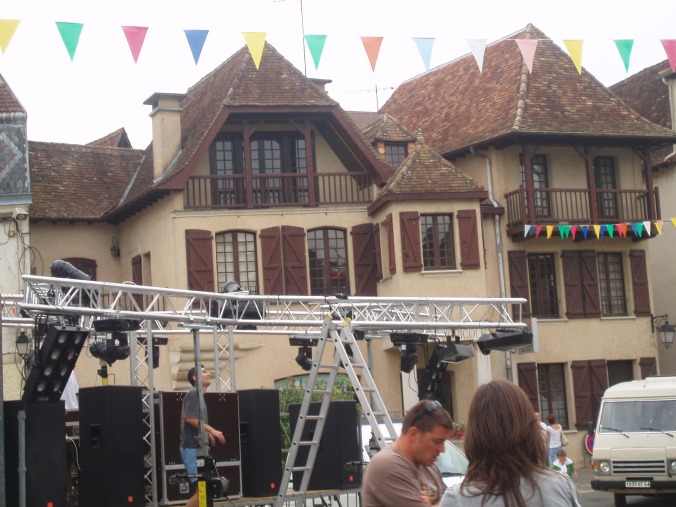 festivities. This we did, in spite of the fact that Salomé was pulling at her leash in an obvious desire to go in the opposite direction away from the crowds and the noise. We wandered past the stands selling local arts and crafts, and culinary products of the region, and strolled out into the Place Bayaa, now completely occupied by makeshift bars selling beer and wine hand-over-fist, and a stage set up with a sound system that looked like it might rock the surrounding houses once it began producing. I shivered at the thought of what might happen to Salomé’s ears if we stayed for the party. At some point of our walk, our ways separated as Kiwi-san headed for his car and home, and I decided to wander a bit more. On the way, I passed a table offering Bearnaise berets. The year before they had been in the same place and I had admired the light blue beret the saleslady was wearing. However, they only had black ones for sale as the blue ones were specially made for the organizers of the event. This year there were blue ones on the table! I couldn’t resist, of course, and ended up doing the rest of the tour looking like this. 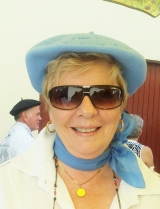 My walk took me to the War Monument, now camouflaged with everything from a woman doing cartoon drawings of people, to a stand with sexy underwear; another table displayed home baked pottery and, further on, a table full of knives for sale. The man behind the table had a honing wheel and the sign read that he would sharpen your knives for 6 euros a piece. I knew what I had to do. There was no way I was going to miss this opportunity and continue living with a kitchen full of dull knives. I walked home as fast as I could and fed Salomé. Then I phoned Kiwi-San.

“The knife-sharpener is in town; right by the War Monument. Do you have any knives that need sharpening?”

“I’ll make you a deal. There is nowhere to park so I can’t drive in, but if you pick me up, you can drive past, drop me off; I’ll get the knives sharpened and then you can drive back and pick me up; that way I don’t have to walk all the way in again.”

We got a block from the War Monument and then I had to get out and walk.

“Great. I’ll call you as soon as the knives are sharpened and you can pick me up at this same place.”

The knife-man turned out to be a stout, amiable, middle-aged Frenchman.

“I can have them for five this afternoon,” he announced handing me his business card. “Call me then to see if you can come for them.” I looked at my watch; it was half past twelve.

“Can’t you do them now,” I asked forlornly.

“Lunch time,” he said, pointing to a makeshift table set up behind his travelling store. A woman was placing Tupperware containers on the table while a younger man opened three bottles of what looked like very cold beer. I knew there was no use arguing. If there is one thing sacred for the French it is eating hours. I called Kiwi on the cell phone.

“Knives won’t be ready till five. I think I’ll wander over to the Place Bayaa and have something to eat. Interested?” He wasn’t. Unable to find a place to park he had returned home. 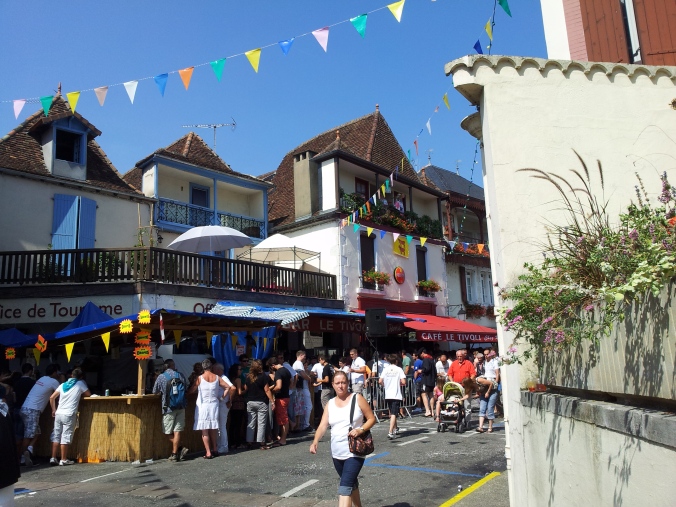 Walking through the crowds without Salomé was easier and I was more relaxed not having to worry about her delicate ears. At the outside bars, the young were well on their way to getting drunk (something almost everyone does during the Fêtes) and I found myself having to duck occasionally while they sprayed each other with beer. People milled around with a glass of wine or beer in their hands, drifting from bar to bar, nibbling on French bread stuffed with chipolatas (a kind of sausage popular in the region) or a basket of French fries. The town had announced it would serve a banquet to over 800 people (a little less than 1/5th the population of Salies) and enormous red tents filled with row upon row of long tables had taken up the far end of the Place Bayaa. Most of the tables were already occupied and waiters wove their way between them placing uncorked 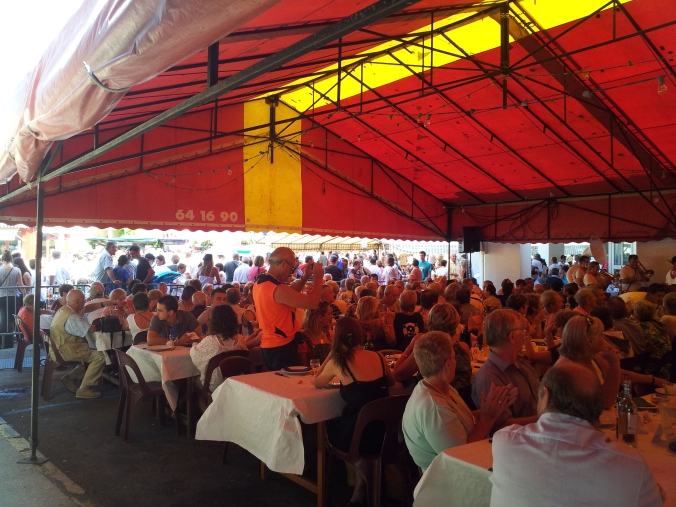 bottles of wine at a rate of one bottle per four people. I had not bought a ticket to the banquet: sitting alone with 800 others was not my  idea of fun. I had already gone to one public banquet the first time I visited Salies and had had my eardrums tortured to death by local bands with nothing but wind and percussion instruments. Off to the side, one of the better restaurants in Salies offered an appetizing Menu de la Fête and luck was with me: there was one small, unoccupied table in the center of the room. As he ushered me to the table, the owner explained that I would have to wait a bit to be served. Considering that no French restaurant is ever in a hurry to serve you, and when it does so after what may seem like an eternal wait, it is with the attitude that they have finally decided to do you the favor, I simply smiled and said “pas problème”. I figured that whatever time I took, mine wouldn’t be any longer than the knife-sharpener’s lunch. I sat there wishing I had brought a book. Then the music struck up. Fortunately, the players were on the far side of the tent from my 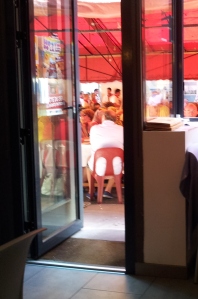 restaurant, so the volume was at a level my eardrums could stand. The band was lively. It played the traditional Béarnaise songs that I had heard at every festival and everybody sang along at the top of their lungs and clapped their hands in tune. It was catching. I found myself smiling with delight when the recognizable chords of Zorba the Greek filled the air. One familiar tune after another, both old time and modern enlivened the atmosphere and had us all clapping and singing, inside and out of the restaurant. Suddenly I felt the presence of my father; it was as if he had suddenly manifested somewhere in the crowd, in the singing, the music, the festive atmosphere. He used to bring his first family (I came from his second marriage) here on vacation during the summer. Had he ever been here during a Salt Festival or any other of the fests that fill the summer months? Had he listened to this same music, drunk their beer or wine and eaten chipolatas on French bread? He was right there in my imagination, so close, so real that my eyes filled with tears and my chest split open with gratitude. What had I done to deserve this, this small town with its seams bursting with life at every turn? To say that I was happy at that moment would have been a gross understatement: I was fall-to-my-knees ecstatic, I was life-can’t-get-any-better grateful and the love for what I was living at that moment felt as if it wouldn’t fit inside one second more. Then lunch arrived and I came back to earth. There was a first dish, a main course, dessert and coffee. It took two hours with the long stretches between servings. The music played the whole time. The crowd outside in the tent clapped, and sang and ate and drank and began again. I paid my bill and looked at my watch. It was three fifteen. He had said five o’clock but maybe luck would have it that he had done the job. I walked slowly back to the War Monument. It was hot, the sun burned my arms and neck; I was beginning to feel tired, my left foot was hurting from all the walking back and forth I had done during the morning.

The knives were not honed, but when the shop-owner saw me standing there looking somewhat bedraggled, he began his work. It took him less than 30 minutes to leave the knives gleaming and sharp enough to slice through a sheet of newspaper. I ummed and ahhed and made the appropriate admiring noises as he held up each knife and did the paper trick. Finally they were done and wrapped and back inside my bag; I paid him and began the long walk home.

Salomé greeted me as if I had been gone for a year. I scratched her ears and tussled her mustache before unpacking the knives and placing them on the magnetized knife holder. Stepping back, I admired the craftsman’s work. He was right, they looked like new, 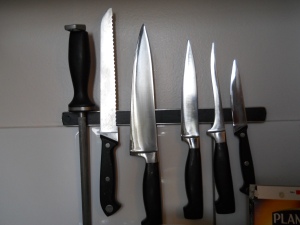 even better than new. Now all I had to do was make sure not to cut my fingers off.