Autumn has come to Salies even though it is still unseasonably warm considering we are more than halfway through October. Since the beginning of September the nights have cooled, the mornings leave a thick coat of dew on the windshield, the corn began to lose its green and then to turn dry brown. Most of it has been harvested.The grapes have been gathered. 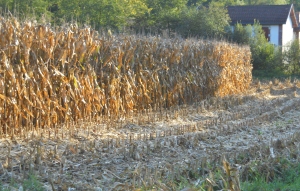 Yesterday I went for a walk up the hill behind my building and past the communal gardens. As I drew away from the bustle of the avenue that runs in front of my place, I began to hear a squawking. It sounded like a literal flock of crows cawing or geese raising a ruckus, but as much as I scoured the horizon looking for the source of the sound I could see nothing. There was a man tidying up his vegetable plot. I drew near and asked what birds were making the sound.

“Les grues, the cranes” he said; “they announce that cold weather is finally coming.”

Again I looked but saw nothing. “Where are they” I queried. He pointed skywards and I followed his finger. Way, way up against a blue background, I saw the tiny specks that were making so much noise. There must have been hundreds of them, flying in long lines, in enormous V formations, in groups that struggled to find a leader to form behind. For a long while I stood and watched them until both the specks and the sounds faded away in the distance.

At home I pull out my I-phone and check the forecast. Surely enough by day after tomorrow we will begin having temperatures of 5º, 3º and 2º C, and during the day the thermometers won’t go above 13º C. I find this knowledge fascinating. The cranes know, the man who owns the garden knows because he has seen and heard the cranes. I, who have lived all my life in cities, am ignorant; I need an I-phone or a weather forecast on television to be informed.

So today I make time to take down the boxes with my winter clothes and refill them with the summer things I won’t use again till next year. Outside my window the leaves of the Liquidambar, better known in English as Sweetgum, are turning red and gold and the climbing ivy on the building behind mine has taken a deep blood red color. 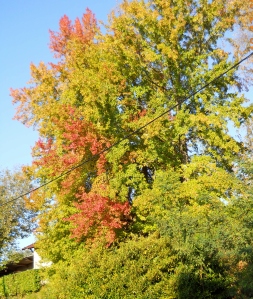 Night comes much more rapidly now and I find myself sleeping later in the mornings. The communal plots are beginning to be cleared; a few tardy lettuces still offer up their green leaves and clumps of late blooming marigolds decorate the browning earth with their bright flowers. In Mexico they are known by their name in nahuatl, Cempazuchitl, which means “100 flowers” because their petals are so many and so densely arranged that they seem to contain many; because they are late bloomers they have become the flower for the Day of the Dead: November 2nd.

When I arrived in Salies last December 2nd, winter had already overtaken the countryside even though it did not officially start until the 21st. So I am entering my fourth season here. I have seen all the changes, from winter to spring to summer and now autumn. I have continued falling in love with my new home during every day of every one of those seasons. I am truly blessed.

One thought on “CHANGING SEASONS”