Or is it just the beginning of The War of Tweets? This morning, on the news, first the Donald (I loved what Obama called him) announced he would begin the Wall between Mexico and the USA in a few weeks and that the Mexican President –who had announced a state visit in a few days- would agree to pay for it. Then, as I turned to French news, one of the candidates for President from the left was being interviewed and the interviewer was asking if he, as President, would use a nuclear weapon against another country as a deterrent, in other words, without being attacked first. I was horrified to hear the possible candidate wiggle and waggle and worm his way around the question without ever answering it. In Spanish we say “El que calla, otorga” which means “He who remains silent, gives permission or agrees”, so I took the wiggle-waggling as a “yes”.

Without actually formulating a fear, I spent the rest of the day feeling slightly depressed: a wall against Mexico and Nuclear war all in one day. It was just too much. Then the Tweets started. The Donald threatened (if you’re not going to pay for the wall, there is no use in your coming), and –fortunately- Peña Nieto answered.

He tweeted his cancellation of the trip. There will be repercussions, of course, and Mexico will probably suffer economically for a while, but for Mexico to retain its trade agreements Peña Nieto would have had to accept paying for the wall and the Mexican people would never have forgiven him. You can’t eat pride, but it sure makes hunger feel a lot less hurtful. I actually checked into my Twitter account for the first time in about 10 years and tweeted the President of Mexico my heartfelt gratitude.

So… We may not have nuclear war yet, but we do have the War of Tweets. If I were really brave, I would tweet the Donald saying “Shame on you for trying to bully Mexico into submission!”, but the truth is I still have to go to the US in April in order to see my son and take a trip with my daughter and I don’t want to be stopped in immigration and not allowed entry. See how scary this is?

The interesting thing was that the moment I made my small contribution (a tweet) I felt better, I actually felt I had done something; I had become a soldier in the Tweet War. But, does a Tweet matter? Apparently to the Donald it does! He counts noses (at his inauguration) and I am sure he counts tweets, at least the positive ones! 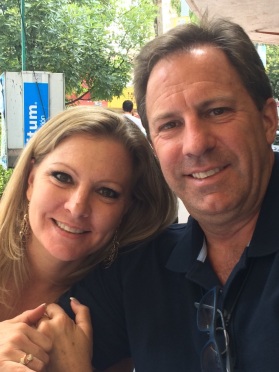 Today my son said on our family’s WhatsApp: “Problems are opportunities; how we take advantage of them defines who we are.” I so appreciate his wisdom; somehow it makes me feel safe and hopeful in face of the changes going on in the world. Whatever comes is a creative challenge and with internet there no longer has to be anything called “the silent majority”. And my daughter, well she is making a marvellous video to promote a film her brother is distributing in Latin America. So my family is alive and wonderfully well, living on either side of the future wall!!! And me on the other side of the Ocean. What a world!