In the spring of 1616, William Shakespeare died. He was 52 years old. Although most of his work had already been published in editions of questionable quality, it wasn’t until 1623 that two of his friends and fellow actors finally published a more definitive text called the First Folio. In the preface, Shakespeare was hailed as “not of an age, but for all time”. Today, his complete works are free on Internet and few of us have not been touched by Shakespeare; I for one have so often been amazed at the depth of his knowledge of the human mind and heart as to be convinced that after William, there is nothing new under the sun. So many things that modern psychology has allowed us to see, he already knew. I recently quoted him in relation to my work with the method of Byron Katie: “There is nothing either good or bad, but thinking makes it so” (Hamlet, Act II, Scene II) and his phrases have become so commonplace that we no longer remember they came from him. “It’s Greek to me”, “In my mind’s eye”, “Can one desire too much of a good thing”, “Forever and a day”, “But love is blind”, “The world’s mine oyster”, “As good luck would have it”, “He will give the devil his due”, “I’ll not budge an inch”, “I have not slept a wink”, “Out of the jaws of death”, “The game is up” and so forth. Shakespeare is so much a part of our everyday language that it is hard to believe anyone could find fault with him, yet the Puritans did along with theater as a whole. The Puritans, it seems could find fault with almost anything that was entertaining, exciting or just downright distracting except –that is- sex… as long as it was practiced within marriage (and with your partner, of course).

In part, the problem was that the theater had grown out of a tradition of enacting religious dramas that was popular amongst Catholics so for the Puritans, who rejected every physical representation of the Divine, it would be suspect from the very beginning. Theaters, public houses, halls where music was played and dancing encouraged were all places that invited vice, drunkenness, gambling and prostitution. Above all, they implied having fun, and fun was considered a dire distraction from the building of a better and more moral society, the only worthy goal here on Earth. Preachers complained that their flock could sit through a couple of hours of theatre and then fall asleep during a one hour sermon. Actors were to be “taken as rogues”, and plays were described as being ‘sucked out of the Devil’s teats, to nourish us in idolatry, heathenry and sin’.[1] Amen!

Puritans, and therefore Elizabeth, were brought up reading the Bible, not Shakespeare; she would have been instructed to take every word of the sacred book literally, never doubting that there were snakes in Paradise as surely as there were in Hadleigh. She was shown to avoid wearing colorful clothing or using adornments of any kind –even buttons- which were considered expressions of self-pride, a dreadful sin in itself. She wasn’t allowed to dance, heaven forbid! and the only music to be heard was in church. If she had ever questioned these Spartan rules, which is very doubtful, her father surely would have explained that these earthy occupations excited the imagination and sometimes the body and could do no good for a young woman entering her adulthood. Elizabeth might have thought that having her imagination excited sounded rather… exciting and that her parents seemed to have a peculiar dread of young girls enjoying themselves. Could it possibly be true that all that seemed delightfully enticing was no more than “a waste of time that spent the soul in frivolous pursuits” as her father, no doubt, had emphatically pointed out.

It must have seemed as if she were allowed but one dream: to meet a worthy man, get married and have her own family. But on the other hand, she would have been severely warned that to look at men on the street or in the market place would give them the impression that she was an ‘easy’ woman, so she should go about her business with modesty and demure and God would arrange what was best for her. And God, it seemed, would take his own good time.

In 1620, Elizabeth turned 18. On the 6th of September of that year, the Mayflower sailed for the New World with 102 passengers and 30 more between officers and crew, but probably no one in Hadleigh heard about it or cared for that matter. It may seem strange for us to think today that such a signal event could be totally ignored at the time but that is how history is: we go about our daily lives ignorant of the fact that someone in the future will either make up a story about how important we were or pass us over entirely.

Elizabeth, apparently in no hurry to wed, sat out the year without a beau. The Mayflower, on the other hand, hurried to its destination arriving around the middle of November after a gruelling journey. They had been lucky: only two passengers had died during the crossing. They were not, however, to fare as well during their first winter which turned out to be an extremely harsh one. Obliged to sit it out aboard the ship, the 100 surviving passengers found themselves decimated by disease; a combination of pneumonia, scurvy and tuberculosis left only 54 passengers and 15 crew members to

disembark the following spring. Those are numbers; they sound dire, but they don’t tell us anything about the families that made the voyage, about the mothers that watched their children die and could do nothing about it, of the children who lost their parents, of the men who stood helpless as their wives succumbed to disease or starvation. Numbers don’t speak of pain or sacrifice; they are just finger-counts of tragedy. And even more sad, the names of those that died were not remembered as the new settlers founded the future Nation.

At the end of March, 1631, the survivors left the Mayflower and set about establishing their Colony, the first in New England that managed to last over a year. They called it Plymouth Colony. They were aided by a native called Tisquantum and whom they named, Squanto. He allegedly had been taken back to the Old World several times (against his will) and had learned to speak English; thanks to him the new settlers learned how to plant maize and other staples and were therefore able to survive. (The story of the Pilgrims and Squanto is told in a miniseries titled Saints and Strangers, available on iTunes).

Meanwhile, back in Hadleigh where none of these goings on between the Indians and the Pilgrims had any relevance, it seemed that marrying Elizabeth and getting her out of sin’s way was more difficult than anyone had expected. 1621, 1622 and 1623 went by without any results. Whether it was Elizabeth or her parents who were being picky, we can’t know, but they all must have been getting nervous about Elizabeth’s chance of fulfilling the most significant aspect of her womanhood -having children- within the holy bounds of matrimony. Apparently, many young English ladies were not actually as prudish as they have been made out to be, and would arrive at the wedding date sporting a tell-tale roundness. 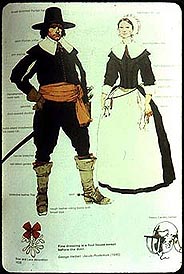 It must have been sometime between the end of 1623 and the beginning of 1624 when Elizabeth Smyth met Samuel Smyth from Whatfield, a somewhat smaller village lying some two miles north of Hadleigh. If these two young lovers had lived in Spain where children kept both parents names, their offspring would have been Smyth and Smyth, and heaven forbid any of them should also have married a Smith of whom there were myriads, much to the dismay of future genealogists. Fortunately, they lived in England, so Miss Elizabeth Smyth became Mrs Elizabeth Smyth without even having to change her signature.

Samuel Smyth, like his father before him, was a fellmonger, a dealer in hides and sheepskins which he prepared for tanning. Exactly when Elizabeth began to notice him, or him her is not known at all and much less for sure. They might have seen each other in the Hadleigh marketplace or in church, or strolling along High Street, and perhaps Samuel, after seeing la belle Elizabeth spoke to his father who in turn would speak to Elizabeth’s father who in turn would speak to his wife who would in turn speak to her, or the other way around, but what is known for certain, without the smallest doubt and absolutely, is that by May of 1624 they knew each other quite well. I will refrain from wondering if this levity

of morals was passed down through the generations for I consider that each generation is responsible for its own, shall we say, de-generation.

Be it as it may, the wedding was set for the 6th of October, 1624, in Saint Margaret’s church in Whatfield. Upon contemplating the usual wedding attire in Puritan times, one wonders if the bride’s dress was purposely

“full”, so to speak, in order to cover any untimely fullness there might be underneath. However that may be, in Elizabeth’s case appearances were kept, at least until the following year when little Samuel was born on February 7th, just four months after the ceremony.

From that date on, Elizabeth’s life fell into the routine that every housewife has known since time immemorial: making babies (the fun part), having babies, changing diapers, washing and ironing the clothes, setting and cleaning the table, making the meals, sweeping, dusting… etc., etc., etc.

After Samuel was born in 1625, the Smyths had a girl whom they named Elizabeth (my 9th Great Grandmother) in January of 1627; in October of the following year, Mary was born and then it wasn’t until four years later, in 1632, that Elizabeth had her fourth child, Philip, on the 25th of November. There might have been miscarriages or early deaths in between, but no record has been kept, and we can presume that life was going well for the young couple.

Yet all was not conjugal bliss and family; there was “double, double toil and trouble,” in more than just Shakespeare’s Macbeth, as the Century of the General Crisis became each year more worthy of its name.

When one has not seen a person in a very long time, it is easy to understand how life and death is the same, how there is absolutely no difference except the story one tells. My son just phoned me to say that Boris died yesterday. END_OF_DOCUMENT_TOKEN_TO_BE_REPLACED

Do we forge it, or are we carried forth like a leaf over rushing waters? Does it actually matter? Perhaps it is the same. We are shaping our destiny by the decisions we take, but we take them really without the least idea where they will eventually lead us. And then there are the things that we apparently don’t choose.  Excluding suicide, the way we are finally to die, for instance. END_OF_DOCUMENT_TOKEN_TO_BE_REPLACED

Looking at my life since my divorce 19 years ago, I realize I have been doing things backwards. Travelling around Europe, living in new places, meeting new people, learning a new language, living in an attic apartment with the minimum is something to be done at 18 or 25, not 68 (and I would ask: Is that true?) END_OF_DOCUMENT_TOKEN_TO_BE_REPLACED