Well maybe all this is enough for the present; heaven can wait. What have I done to be gifted such joy. I mean it, to live in this fantastic, beautiful, friendly little French town where, when it doesn’t rain and the sky is blue, it is the bluest of skies I have ever seen. 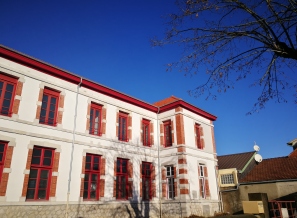 Ok, first an apology: I know it has been almost 6 months since my last post but… (and here is where I reveal the secret of my silence)… I-am-writing-a-book… Yes, I can finally say it is happening, after umpteen false starts that never went farther tan 3-5 pages, and a ton of frustration as inspiration hid its beautiful face, I realized that the Universe had been subtly -and sometimes not so subtly- pushing me in the direction to take. First it was the letters that my children’s father had kept and that were handed to 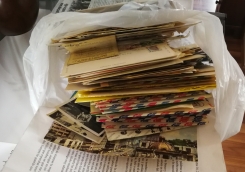 me with all his mementos from our relationship a couple of Xmases ago; then it was the flood in Salies last June where my cellar storeroom was flooded and the cardboard box containing all my journals since 1992 was half soaked. In both cases, I had to decide if I wanted to throw out the memories or keep them. As I decided to keep them, reread the letters and began to dry out the notebooks containing 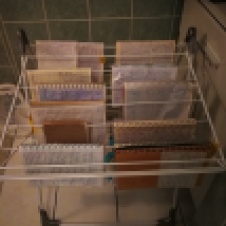 all my diary writings, I realized suddenly that the Universe kept poking me to tell me that everything I needed was there and I should begin to write… whatever: a memoire, a novel… it will be what it will be, for the moment I am just filling page after page (320 single-spaced so far). How do I know this is what I am supposed to be doing? Because it is flowing without any effort and I even found a narrative structure immediately which is working wonderfully. So this is the reason that I haven’t continued this blog up to now and probably won’t be posting much in the near future.

Today, however, I couldn’t help feeling the joy of my life, and I needed to share my gratitude publically. Not only is the Spring temperature delightful, not only is the sky so blue it’s hard to believe, not only are both my doggies fine and happy, not only am I going to eat in my favorite daily restaurant today sitting on the terrace,… but also my walk home was strewn with love. First I went to La Pause Gourmand where they have the best coffee in Salies. There, Salomé and Lolipop get their morning bisquits and I have a café alongée noisette (which means it is American style coffee -long- with a drop of milk). There I said hello to the gentleman who sometimes sits at a table in the afternoon 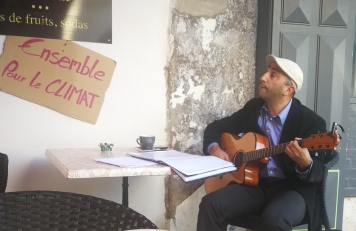 and plays his guitar and sings, and to a nice lady who I know from the other café where I usually go (closed on Wednesdays) who asked to sit at my table. When I finished, I drifted -doggies in tow- over to the other café, owned by a Vietnamese man, that has just opened after repairs from the flood (yes! there are still places in need of repairs). There I had a normal coffee and chatted for a while with a group of people I know.

Having finished my morning coffees without having been joined by any of my regular group of friends, I decided to take a walk through town. A few minutes later my phone rang. Now answering a call with two dogs and a bag of dog-poo in hand is not easy, but I managed and it was my artist friend, Yvette. We were near each other so we met up by the Monument to the fallen of WWI (there are three Domecq’s there: Felix, Clement and Pierre) and then I walked with her back to the Mairie (Town Hall) where we parted 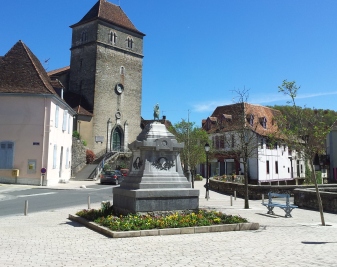 It was time to start home. As I crossed the parking lot of the Temple (the protestant temple), I spied Christophe’s small red car. Christophe is one of my favorite people in Salies. He fixes my computer or my cell phone when needed -which is handy, to be sure- but apart from that I adore him just for who he is, which is a generous, loving human being. As I passed the first house on the corner, where another friend, Michele, lives, the door opened and out came a big, black dog. I recognized her immediately as Christophe’s dog named -incredibly- Blanche (White). Holding fast to her harness was Michele, who was trying to stop her from running into the street; he was carrying his little dog, Pepette, who immediately wanted to say hello to Salomé and Lolipop. Close behind came Christophe and it was kisses all around and dog pets and a morning exchange of greetings. And then Christophe insisted on going back inside because he had 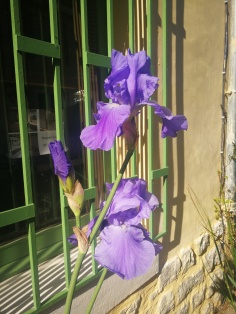 to finish fixing Michele’s computer in time to see another client.

I continued on my way and a few meters later ran into Nichole who lives in an apartment a little ways from mine. She is the mother of one of our local writers and hails from South Africa. We speak in French for a moment commenting on the beautiful weather, I ask her where she is going to eat and tell her that I will be at my regular haunt, the Grignotine, and we say good-bye promising to have that cup of tea we are always saying we will share and never do.

A little further on, when I am just thinking how wonderful it is to live in a community where one runs into friends every time one steps out and trying to take in the blueness of the sky without losing my breath, I meet Nicholas. Nicholas is a handsome man, probably in his late 50’s or early 60’s with a lovely wife named Genevieve. He heads up several volunteer organizations in town: the Resto des Couers where I used to volunteer until it became obvious that there were more volunteers than needed; and something called the 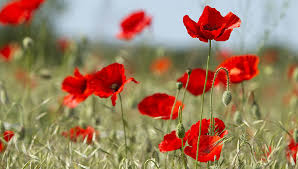 Coquelicots, which refers to a red poppy flower common in the fields of Europe in general, an association formed to protest against the use of pesticides.

Nicholas is another one of my local loves and we stop and chat for a good ten minutes about the future meeting of the coquelicots and the blueness of the sky (he says it was bluer in Tibet because it was closer due to the height… whatever). 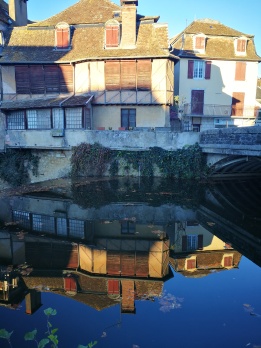 So by the time I say goodbye and arrive at my building, I have spent 45 minutes since my last cup of coffee, received and given several loving hugs, interchanged conversation and information with several people and realized over and over again that I live in the friendliest, most beautiful place in the world. 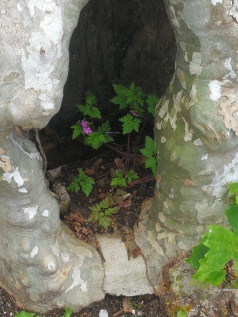 ¡How could I not be happy!